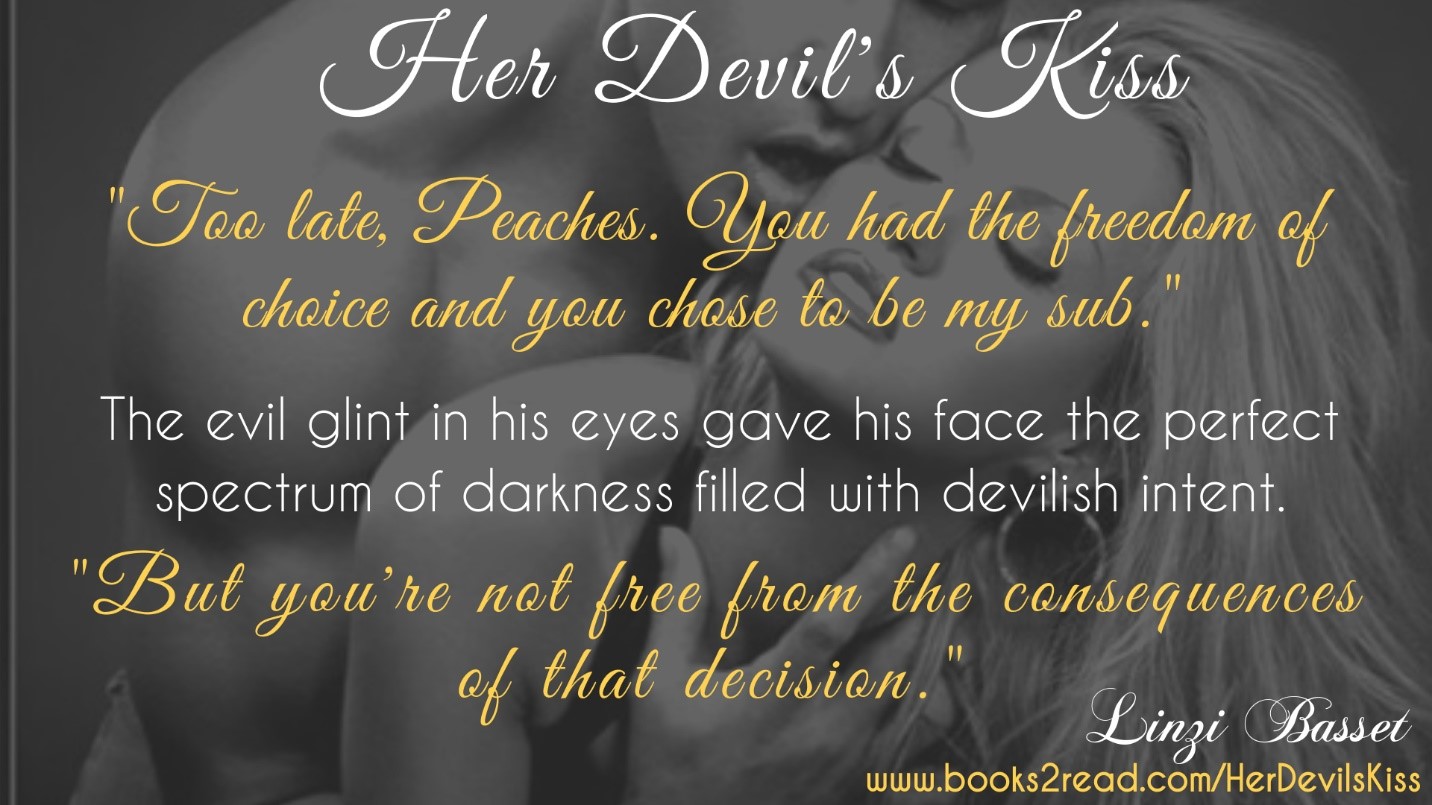 Her Devil’s Kiss by Linzi Basset

A woman scorned is one thing … but what about a Dom?

“You had the freedom of choice and you chose to be my sub. But you’re not free from the consequences of that decision.”

Pamela is a siren on stilettos, and Governor Alex White is torn between the formidable Domme and the memory of her as a sweet submissive. Her scent is ingrained in his soul, but he must come to terms that it’s time to move on. He won’t be used anymore, and he has no intention of falling for her same sensual trap. But that’s easier said than done. Especially when she worms her way into his house and is underfoot everywhere he turns. When fate steps in and she’s forced to become his trainee sub, the devil in him stirs to life his ravenous hunger. The hunt is on as he sets out to make her the slave to his desires.

“No, you didn’t, but you did invite me to anything in the house I’m hungry for. And I’m very … very hungry for you … Master Rage.”

She’s lived in limbo for the past four years, kept afloat by being close to the only man who has ever captured her heart and the one man she won’t allow herself to have. It isn’t fair to him, but that isn’t her fault. If he wasn’t so damn gorgeous, she might have stopped longing for what could have been long ago.

When regret and hindsight threaten to destroy her only chance at happiness, she refuses to give up. As the battle of lust and love ensues she insists on fighting for what she deserves … but is it too late?

Alex and Pamela must find the trust and resilience to survive the wave of destruction that threatens not just their happiness but their lives.

The devastation left by the Sixth Order shattered the Precision Secure team. Losing one of their best friends left them vulnerable and simultaneously awakened their wrath. Now that the mighty leaders of the syndicate have had a taste of victory, they surge forward, more determined than ever.

The real war has just begun as secret plots are revealed, traitors infiltrate enemy territory, the death toll rises, and not everyone or everything is as it seems.

Hot damn! Some of these chapters deserve to be read twice and thrice … because you might just lose your place as you … enjoy yourself. And if ‘those’ chapters don’t have you salivating and sitting at the edge of your seat, the suspense and mysteries revealed WILL! Basset never EVER disappoints in the hot and heavy or the violence and dramatics! Total win win!

Get Her Devil’s Kiss now and continue on this compelling and addictive series.

Her Devil’s Kiss is an edgy, fast-paced, sexy romantic suspense story. Once you start reading this series, you can’t stop and will wait impatiently for the next book to release. The next book, His Devil’s Rage will be released in March 2019.

“You should care, Mrs. Seeger, because once I’ve made you mine, I won’t let you go until I’ve had my fill. You can bet your last fucking cent, I’ll make sure you know it. You’ll be mine to control. I will fuck with your mind, your body, and turn you into a pretzel for pleasure … my pleasure.” He hesitated and fisted his hand in a tuft of hair to keep her head tilted back. “Is that what you want? Think carefully.”

“Then what was this?”

He smirked. “This was exactly what I warned you, my dear, and now that you’ve accepted, you’ll be my sex slave whenever, wherever, and however I want you.”

“Better check your attitude, sub, or I see a dour evening ahead of you.”

He looked at her as he detected the movement. “Yes? Anything to say?” he asked dryly, daring her to speak. She snapped her lips closed and elected to let her eyes speak for her. “Far be it for me to remind you that glowering at your Dom is equally disrespectful, Peaches.” He smiled broadly as he quickly hooked her ankle cuffs to the links on the front of the counter. “I have no problem adding another component to this punishment.”

“The only sounds I want to hear are your moans and cries. However, if you plead nicely to come, I just might say yes … now and then.”

“Too late, Peaches. You had the freedom of choice and you chose to be my sub.” The evil glint in his eyes gave his face the perfect spectrum of darkness filled with devilish intent. “But you’re not free from the consequences of that decision.”

“I choose to do it this way, my pet, because I want to look into your eyes as I fuck your ass.”

He dipped his head to draw one nipple deep into his mouth. She arched and squeaked in protest. He lifted his head, watching as her mouth opened.

“Too late, Peaches. You had the freedom of choice and you chose to be my sub.” The evil glint in his eyes gave his face the perfect spectrum of darkness filled with devilish intent. “But you’re not free from the consequences of that decision.”

He reached up to cup his hand under the soft, smooth skin of her chin. It was an exclusively intimate touch, presumptuous.

Pamela’s breath hitched in her throat. Her body began to tremble. She inhaled his exhilarating scent and couldn’t stop the flush of heat that flooded her pussy.

Alex was delighted by the enticing bouquet of her arousal that tickled his nose. That, combined with her reaction was the only acknowledgement he needed of his power over her. His voice darkened. “I’m in charge now, sub. It’s time you accept it.”

Pamela closed her eyes as his voice sent frissons of desire all through her. He straightened, leaving her completely overwhelmed by the effect his brief touch had on her. It had made her feel wanted once again, something she had missed for so long. At the same time, she mentally prepared herself for what was coming.

“Wade, please announce that you have some delicious peaches as a snack for the next thirty minutes. Five minutes per meal.”

Pamela clamped her lips tight together, refusing to give in to the desire to plead with him or shout out red. She felt bereft of his heat when he stepped back, until his low growl reached her ears.

“Ah, what the hell, I might as well have a little appetizer myself.”

He leaned forward, licking her pussy with long slow strokes of his tongue. A low groan crawled from her chest as he circled her clit with the hard tip of his tongue.

“Ah … shit,” she moaned low in her throat when his lips closed around it and he sucked. Softly at first, then harder while his fingers teased the entrance of her pussy.

Then he was gone. Her eyes shot open to encounter his devilish smile.

“There, properly primed for the first customer.”

Linzi Basset is a top 100 Amazon and iBooks Bestselling Author.

Not satisfied to be chained to one genre, she flourishes in producing multiple realms of her imaginary world. Her bestselling Club Cove series have all achieved top 5 on the Amazon charts. Her stories are edgy, dark, suspenseful and at times filled with sweet romance. Linzi is a sucker for HEA and all her books have a happy ending, no matter the battles each couple have to fight to get there.

As a full time author, there’s only one place you’ll ever find Linzi and that’s behind her laptop … well, now and then she pops in at the gym too and she’s never without her trusty energy booster … a steaming cup of coffee!

(Receive a FREE sizzling short, The Interview, when you subscribe!)