Sometimes a books can come along and make a personal difference in your life at just the right time. This one did just that. 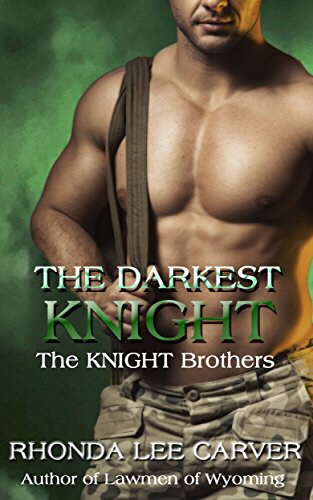 Now that I’ve finished Claimed by the Lawman I decided I want to visit one of my old book boyfriends.

The Darkest Knight holds a personal place in my heart. Rhonda Lee Carver wrote it right when it was needed for me. A personal connection she didn’t know anything about. Great timing, Karma or some other Devine intervention. It helped me through a really hard time for me.

It’s time to dust off my Darkest Knight (Seth Knight) and get reacquainted. Maybe he missed me too ❤️ side note- I love Rhonda’s covers.

Buy link just Incase you want to read along with me

Army Ranger Seth Knight, also known as Dark Knight, isn’t a stranger to danger or trauma. A bomb explosion during a covert mission left him scarred physically and, more importantly, emotionally. With no interest in his family’s fortunes and glamorous social revelries, he has secluded himself on the large property his father left him in the Tennessee hills. He likes being alone, but when a fiery spirit shows up on his doorstep, his peace and quiet gets a makeover.

Reese’s work helping injured veterans is jeopardized when Angelina Knight passes away. She had promised to financially back Reese’s project. Now Reese must turn to plan B: Seth Knight. She’s heard the rumors of the recluse in the mountains and isn’t sure how she’ll convince the angry soldier why he should open his secret haven to veterans when he wants nothing to do with her, or her dreams.

Little does she know, but will find out, that the “Dark Knight” has many layers, and badass isn’t the only one.

Seth thinks he’s agreeing to help Reese, but soon he’ll find out that she is the one saving him…